The truth about "them and us"

Spending 25 years in the wilderness, observing wildlife behavior first hand will give you an unusual perspective on most things but especially our relationship with the other life forms we share this planet with. Most of us are raised with either and implicit or explicit believe that we are set apart from them and that they exist to fulfill our needs, but if you take the time to study their behavior you find yourself with the dawning realization that we are not so different to them as we might like to think. As you are drawn deeper into their lives and learn to understand their silent language the more you understand of their secret lives and inevitably come to understand the parallels between their existence and ours. Since we humans have developed a very sophisticated communication system that uses language and animals have limited vocal communications, we can only learn of their secret lives through observing their behavior and when we understand their body language only then can we begin to appreciate just how vibrant their lives are. The parallels between their lives and ours are so striking to the educated eye that it is not uncommon for field biologists to appear to loose all perspective of the established status quo between "us and them". These researchers begin to show, what appears to be, an irrational bias towards their study subjects and we are accustomed to hearing stories of former dolphin trainers arrested for trying to orchestrate the escape of their former charges and primatologists who becoming passionate animal rights activists. It's no surprise that this happens more frequently with animals that posses higher intelligence since they have richer social lives and communicate more eloquently but the idea attributing "human" behavior to animals is deemed unacceptable by the scientific community. The term they use for this is anthropomorphism and it's frowned upon in academic circles because it's thought that projecting "human" emotions onto our animal subjects only serve's to muddy the waters since we are so different to them. I think the truth is that in reality they are not like us but perhaps we are much more like them than we care to admit! Much of our behavior is driven by the same shared imperatives the only difference being that the animals are not burdened with our elaborate code of "manners" we have had to create to cope with our complex societies, but as we have seen in the wake of some natural disasters, anarchy is but one hot meal away! 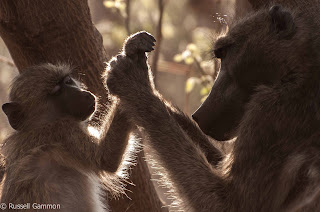 Email ThisBlogThis!Share to TwitterShare to FacebookShare to Pinterest
Labels: Wildlife