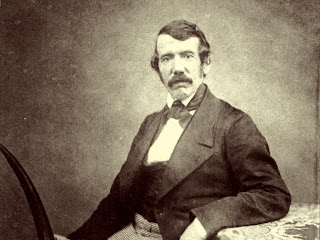 150 years ago a missionary, searching for a trade rout to the outside world, stumbled upon a waterfall so magnificent that he described it as “the most impressive sight I have seen in all my years in Africa” The discovery was to launch David Livingstone’s career as an African Explorer which, in the next 20 years, would see him traverse over 28 000 miles of uncharted territory and add to the know portion of the globe, over 1 000 000 square miles.  It is hard for us today, to grasp the dangers and challenges these hardy souls faced in their line of work. At this time, the life expectancy of a European in the hinterland of Africa was just 6 months and for each individual that triumphed and went on to fame and fortune there were many more who tried and failed and paid the ultimate price. I have always marveled at what drove these men and women and when the opportunity presented itself to retrace Livingstone’s rout down the to I jumped at it. I joined a team lead by the famous British polar explorer Sir Ranulf Fiennes, and it was our intention to follow Livingstone’s rout as closely as possible using the same form of transportation as he had.

Our journey began at , a medium size settlement about 150 kilometers upstream from the Falls in . That first night we were treated to a spectacular thunder storm that marked the onset of the rains and it is interesting to noted that Livingstone had been experienced this same event, just one day earlier, all those years ago. Progress has touched even this remote corner of Africa bringing with it cell phones, roads and fishermen from far flung corners of the globe in search of the legendary Tiger Fish. In spite of this it’s heartbeat remains uniquely African and the cadence of village dogs, distant drumming and murmured conversation quickly lulled us to sleep under a leaden sky. We embarked on our adventure the next day in the gentle rain and as we set out I recalled an entry from Livingstone’s journal “I have been wet time without number……”  It seemed to me that I was about to get my wish and find out exactly what Livingstone had experienced! The river in this section meanders lazily along the length of a vast floodplain and not knowing how far we had to go, we forged ahead as best we could. What we had discovered from our research is that, understandably, Livingstone had only noted the names and locations of points along his journey that he felt, might be of interest to his readers but on the occasions he had camped out in the wilderness, he made no mention of it. In keeping with this tradition our first night we camped on a nameless, pristine sand bank alongside the . The river in these parts is like a life giving artery threading its way through an otherwise barren landscape and as the human population has risen this pressure has sadly, take its toll on the wildlife. After two days of canoeing we reached the Katambora Rapids and disembarked there, as Livingstone had done, to walk around the rapids. The following morning was crisp and clear and as we walked along the tapestry of village life unfolded around us. Children in their neat school uniforms accompanied us, taking the opportunity to practice their English, older folk sat in the sun warming their bones and the village ladies gossiped as they went about their morning chores. I was struck by how little life here had changed since Livingstone passed this way and it was daunting to think how the pace of change, in the world outside, continues to accelerate and what significance that might hold for the people of rural Africa. Perhaps this was the insight I had been looking for- perhaps this same sense of urgency was what drove Livingstone to explore with a view to opening it up to the outside world. Our last full day of canoeing took us down the section of the river about which Livingstone had written, “scenes so lovely must have been gazed upon by Angles in their flight” and true to form, the scenery was spectacular. The river is braided in narrow channels around basalt islands and the deep water below these chutes are prized by the many herds of hippo’s found hereabouts. We spent that last night in a magical setting on , where we had previously discovered the visible remains of the grave of Chief Sekoti documented by Livingstone 150 years earlier. Having this tangible link to the past and knowing we were camped exactly on the site used by Livingstone, under a full African moon, ensured that this was one of the most memorable nights of all.

The last day, as we approached the Falls, we began to see Helicopters overhead, a bit of a shock after five days of being in the wilderness. I have always found returning to “civilization” after being in the bush a mixed blessing- along with the convenience comes so many distractions after the simple rhythm of traveling. As we approached the Falls we first spotted the spray which gives rise to their local name Mosi- O- Tunya, The Smoke that Thunders, and we began working our way down stream through the maze of channels. A miscalculation here would spell disaster as the river flows strongly just above the Falls so we had to be sure to emerge at exactly the right point to give us a shot at reaching , on the lip of the chasm. We finally landed at midday where we were greeted by the full magnificence of the Falls in their entire splendor which was a great finally to a memorable journey. Later that evening we attended an official reception with all the pomp and ceremony that such an event entails. After years of leading an isolated existence Livingstone had never been at ease in society and that night I felt a real empathy with him. I think I finally understood why this enigmatic man had spent 26, of the last 30 years of his life, living and traveling in remote areas of . In spite of the hardship and danger I believe he found the freedom of traveling in the truly intoxicating.
Posted by Unknown at 7:54 AM