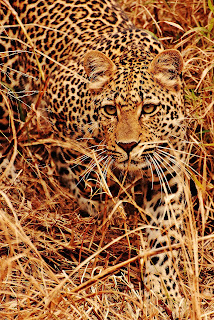 Just got back from a safari visiting Mala Mala, Mashatu, Xakanaka and Livingstone to view Victoria Falls. We had wonderful game viewing which began within 5 minuets of landing at Mala Mala with a leopard on the road from the airstrip to camp! For those of you that haven't been on safari, this does not happen often! The highlight, for me, was the sighting of an Aardwolf which is quite rare but I also got two excellent pictures of cats. The leopard (left) is a young male we spotted in a river bed and we spent two agonizing hours watching him stalk a young bush buck. His stalk was made almost impossible by an open sand river bed as well as the presence of a pair of squirrels. These eagle eyed rodents have a distinctive alarm call which alerted the bush buck in question that something was afoot. When the squirrels finally left they were replaced by and equally alert pair of Spurfowl- there are no free meals in the bush! 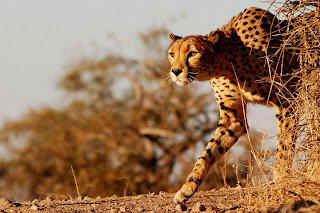 In Mashatu we sat with this cheetah and her cub till  they started hunting in the late afternoon and I managed to catch this shot of her as she rounded the bush in the late afternoon light. Cheetah are an endangered species for reasons I will discuss in my next post but Mashatu is one of the best locations to see them in Southern Africa- we have excellent results and I will be back there next week so I will hopefully have more photos for you then.
Posted by Unknown at 10:35 PM